Whale Trail Frenzy Will Bring Some Color Into Your Life

They say that when life gives you lemons, you make lemonade. There are good days where nothing can bring you down and there are bad days where everything seems to go wrong no matter what. Thankfully, there are games like Whale Trail Frenzy to ease your worries with its relaxing game play and catchy soundtrack. If you've never heard of this gem before, Whale Trail Frenzy is an endless flyer by ustwo. It stars a cute whale named Willow and tasks you with collecting Blubbles by flying and doing loops in the sky.

The formula in Whale Trail Frenzy is simple: avoid getting zapped by rain clouds while collecting as many Blubbles as you can. Why is this so? Well, there is a story behind all this. Willow the Whale is a peace-loving creature. The ocean where he lived has always been quiet and safe, that is, until nasty Baron Von Barry came along. Not only do gloomy rain clouds follow the Baron wherever he goes, he also intends to capture Willow and bring peace to an end. Luckily, the cheery whale found out that the Baron cannot follow through the magic rainbow. Help Willow the Whale escape his clutches and fly to freedom by collecting as many Blubbles as you can.

Regardless what your view is of flying whales and rainbow trails, you won't have much of a problem learning the game's controls. All you need to do is to press on the screen to make Willow fly. Lifting your finger will make him take a dive. Blubbles serve as your fuel source and they aren't always arranged in curves or straights. In order to collect them continuously, you'll also need to master the art of doing loops. This is done by pressing and holding. If you come across rain clouds, you will need to maneuver around them. Bumping into them reduces your rainbow trail. And, just like a car, Willow can fly without fuel so losing all Blubbles results in a Game Over.

Though the Baron has filled the world with dreary rain clouds, not everything there is out to harm the cute whale. Stars are scattered alongside the Blubbles and collecting seven of these give Willow a boost and make him invincible. These come in different colors but don't let that intimidate you. The colors you're missing reappear so it's all right to miss one or two of them.

What's great about Whale Trail Frenzy is its ability to keep you focused. While you're busy collecting fuel, you get to enjoy the game's fantastic soundtrack. We're not talking about mere loops here. Unlike other casual titles, Whale Trail Frenzy uses lyrics in its music. Just like the game play, the music has a relaxed vibe yet manages to be peppy enough to keep you alert as you avoid those fuel-sapping rain clouds.

If you're a casual type of player who is only after collecting Blubbles, you might enjoy checking out the game's Stats page. This gives you a rundown of what you've been doing during your game sessions. You can check how many times you've played the game, the number of zones you've reached and how many loops you've performed. It also tells you the highest climb you've made and more. Now, if you're someone who works better with some concrete goals, then you may want to check out Whale Trail Frenzy's missions. By, say, collecting all of the Blubbles from the Red Goody, you'll be able to clear one and earn some free Krill (the game's premium currency) while you're at it.

As this title is free to download and play, expect a few ads to pop out every now and then. The good news is that they don't appear frequently enough to be annoying. Plus, purchasing a Krill pack once will remove them entirely.

So, is Whale Trail Frenzy for you? Well, this endless flyer is certainly a gem of the genre. It combines straightforward game play with a polished presentation and it is able to keep its controls simple enough for all types of players. With cute characters and no violence whatsoever, it's even appropriate for kids so long as they are able to grasp the concept of basic gesture controls. We recommend playing Whale Trail Frenzy for anyone who either wants to kill some time or is looking to bring a little sunshine into their day. 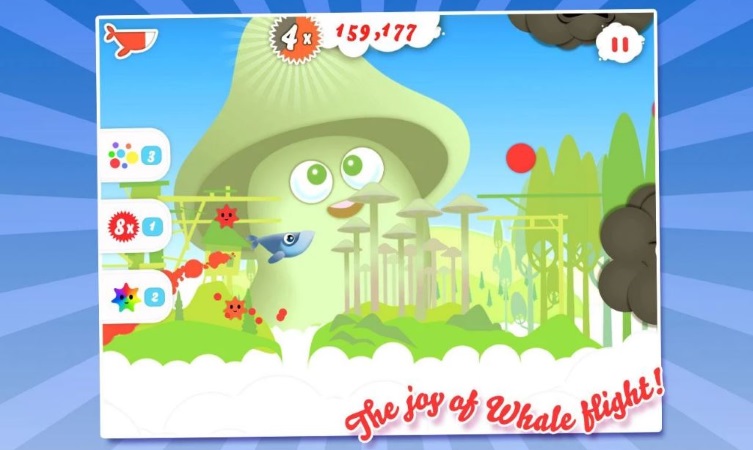 Whale Trail Frenzy is developed by Us Two.